Roll Player Adventures is a cooperative storytelling board game for 1-4 players set in the world of the critically acclaimed dice manipulation game, Roll Player. Players take the role of fantasy heroes: facing challenges, adventuring through the realm of Ulos, and making decisions that change the story — and the kingdom — forever. 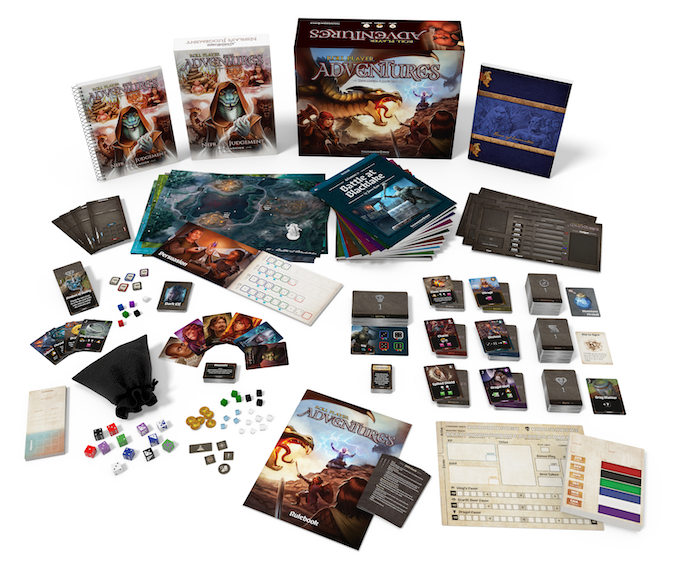 After a thousand years of peace, Dragul armies raided from the north, prompting you and every other loyal citizen of Nalos to sign up as soldiers of the King’s Guard. The armies of Nalos fought long and hard against the North’s monstrous generals and their minions, finally turning the tide of the Dragul Invasion.

In each of the game’s 12 storybooks, you’ll be asked to make choices, complete skill checks, and fight battles that will permanently alter the world of Nalos for that adventure and in future adventures. You’ll find new allies, make enemies, and uncover secrets that will change the world around you.

Whatever choices you make, someone will remember — and respond.

Choose from one of six pregenerated characters, or import a favorite Roll Player character and take them on a heroic journey. Each character brings unique attributes, starting cards, class abilities, and backstories to your adventure.

Roll Player Adventures does NOT require the Roll Player base game or any of its expansions to play, though it’s possible to import characters generated in Roll Player using any number of its expansions. Do you have a favorite Obnoxious Saurian Fighter who grew up as a Street Urchin from your last game of Roll Player? Bring them along!