Daring you to the moon of Europa, The Artemis Project is among the space games with countless outcomes. Compete against opponents to establish the best colony using dice placement, engine building and set collection.

The year is 2348, and we have carved out a meager handhold on Europa, the frozen moon of Jupiter. Decades of effort have made air breathable and the temperatures survivable, but the real prize is the great living ocean hidden deep below the ice. The waters are warmed by volcanic action and are burgeoning with alien sea life. Food, minerals, energy, and living space are waiting for the team with the skills to harness them. The amazing art of Dominik Mayer brings both halves of this world to crackling life!

You are the head of a team of Stabilizers attempting to build the most successful colony before the game ends. The Artemis Project will challenge you to scratch out success in this hostile environment in the face of fierce competition with a gripping blend of gameplay elements: 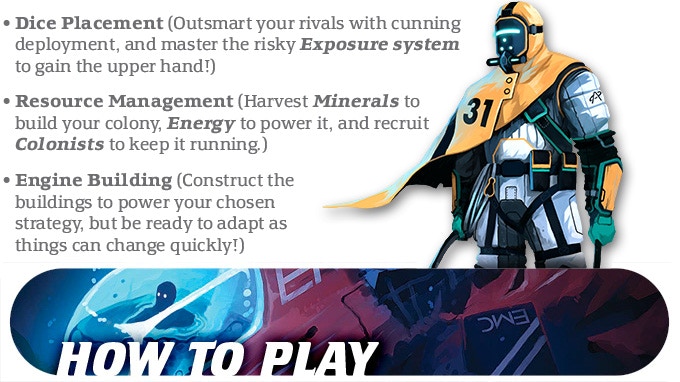 Let’s learn about the regions:

With clever placement and flexibility, you’ll gather the Minerals to build a better colony, the Energy to power it, and the Colonists to run it. Every round unfolds differently as supplies fluctuate, Expeditions change, and Events shake your expectations.

After six rounds, earn points in a variety of ways including your success on expeditions, your colony’s expansion, your team of colonists, and the powers of your Surface buildings. The Stabilizer with the most successful colony wins the game!

The Kickstarter Edition of The Artemis Project comes with everything described above, plus all stretch goals reached during the campaign!

Elements unique to the Kickstarter Edition include: